​​​The Problem Is Not Available: 364 Days in Sudan 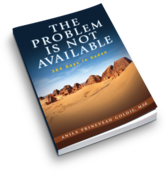 THE PROBLEM IS NOT AVAILABLE

Art work  on this website and in the presentations can also be purchased:

Imbued with paranormal powers, humble, charming, upbeat, and generous, Abu is a mystical being who is rich in wisdom and life experience. Poor as a church mouse, he is a living lesson in true prosperity. Recognizing me as a kindred, reformed rascal and a sister inspirit, he opened his world and his heart to me. I owe him my life. How can I repay him? I can do the same for another some day.

Chapter 11: Close Encounters with Camels
As the hot wind whips through the camel market I think, This is typical for Sudan. A hot wind always blows. It feels as if someone opened a door to a blast furnace, and I’m standing directly in front of that furnace right now. And yet, I never see tempers rise in Sudan. Incredible!

. . . they turned to look at the stage as the canned music started to blare and the pre-wedding dancing began. For the next forty-five minutes, I stood elbow-to-elbow in a sea of rowdy Sudanese women who were hooting, clapping, thrusting their right fists into the air in time to the music and singing along with the songs. They hollered the Arabic equivalent of, “Go girl! Shake it! Do it! Do it for your man.” If you saw these women on the street you’d never guess in a million years that they were capable of such raucous behavior.
Clad in a fire-engine red, short, skin-tight dress, and a black wig of braided hair which came down to her waist, the bride-to-be danced, slithered, glided, undulated, and moved tirelessly. She wore an elaborate headdress, and wrist and ankle bracelets made of many jingling gold coins. On her hands and bare feet she was decorated with traditional, black, henna tattoos painted in fanciful flower designs . . . The groom was either dancing with the bride or sitting next to the raised platform where she was dancing. From his seat he checked her out, boldly and suggestively from head to toe, and toe to head, again and again. He was the only male amongst a bevy of amped-up, colorful, juicy ladies.

. . . The taxi traveled mile, after mile, after mile. I lost all sense of direction. I didn’t know if we were going north, south, east, or west, but I knew I was a long way from home. I had never seen this part of Khartoum, and I had never seen these women. But, I had seen this part of myself. I was scared. Really scared. Many possibilities went through my mind in rapid succession including: I am being kidnapped and I will be tortured and killed; they want to hold me in captivity and observe my strange foreigner ways; this could prove to be one of the most dangerous, or stupidest, or one of the most interesting adventures of my life, or something in between. I don’t know what’s going to happen to me . . .   ​​​

For those not familiar, an MP3 CD is different from a standard audio CD. It will play in a computer and in newer CD players that support the MP3 format.